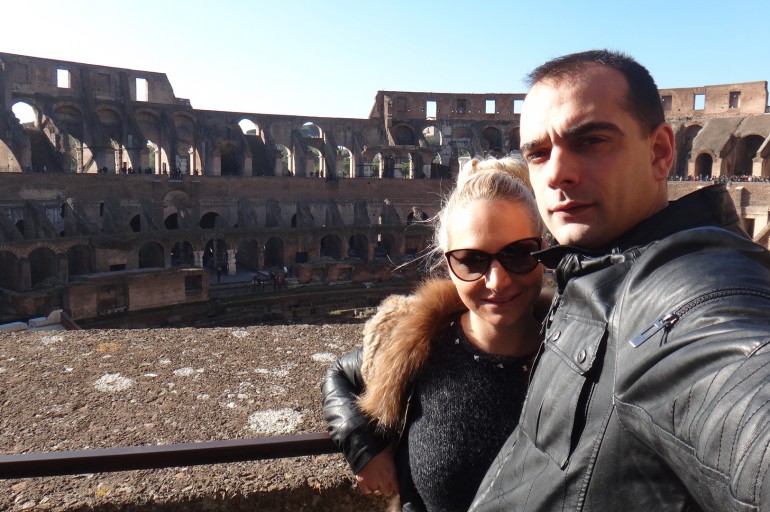 Our journey from Barcelona continued to Rome. Although it was short trip, only two days, we gave our best to see and visit the Rome best locations.

Capital of Italy, Rome has population of 3,3 million people and it’s also known by the name Eternal city or City of the Seven Hills. It’s well known thing that within the borders of Rome is Vatican. Sovereign territory of the Holly See. Now little less known facts: according to legend, Rome was founded by the brothers Romulus and Remus on 21st April 753. BC and we all know that those two boys were raised by she-wolf. Later Remus was killed by his brother Romulus and by Rome got name by him. 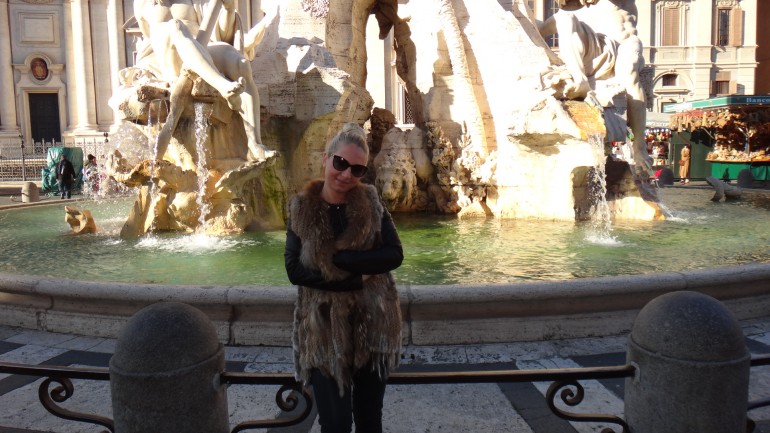 For us, this was amazing trip and vacation. This fountain is just magical 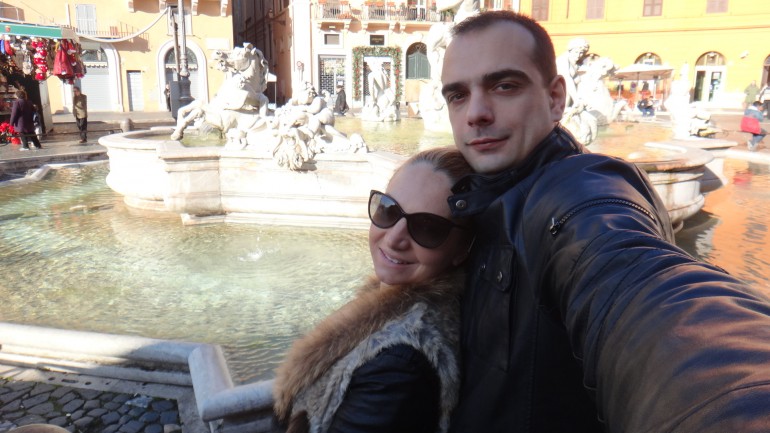 Rome was once a symbol of powerful empire and today is a city that with it’s beauty and amazing sights attracts tourist from all over the world.

We had very little time for the tour so we started sightseeing from early morning. First and of course one of the most interesting places in Rome is the Colosseum. The largest and most important arena in once huge Roman Empire. It was built between 72 and 80 years BC and also like today’s stadiums it could accommodate about 50 000 people. 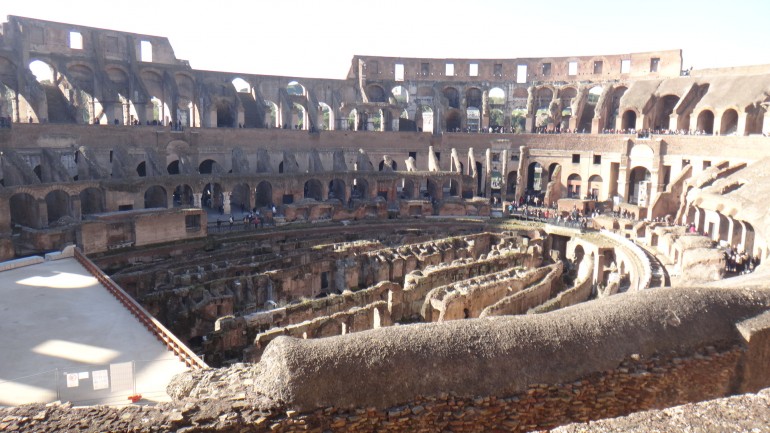 The interior of the Colosseum looks just amazing! 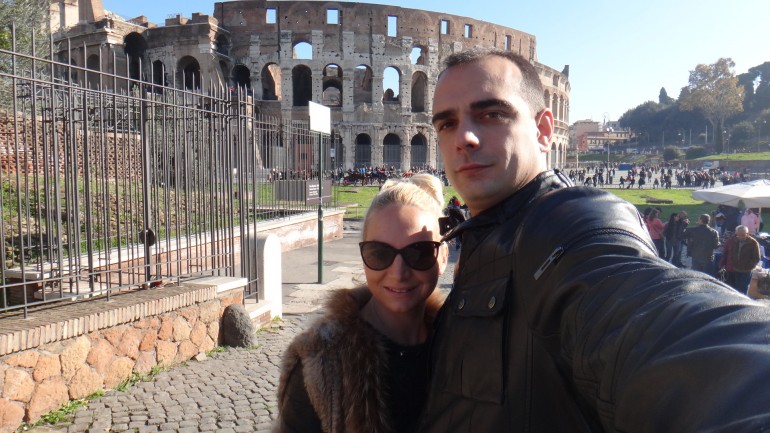 In addition to being a colossal building, the Colosseum is known for a very good system of organization of entry and exit for many spectators. They, for the first time, introduce individual tickets, on which was marked one of the 74 different entrances also row and seat. Because of that way of organization, 50 000 people could enter inside in 15 minutes and also for the same time to exit the Colosseum.  Otherwise, the ticket for “Games” was free for everyone. From a total of 80 entrances, 74 were for ordinary people and 6 for special purposes. Two of them were for very important dignitaries (such as senators), two for an entrance of the victorious gladiator, also called “Doors of life” and last two were called “Doors of Death” and through them, they amounted bodies of dead gladiators. 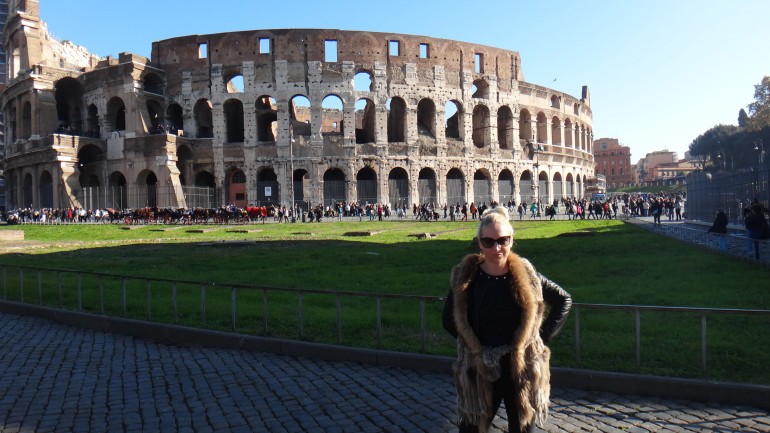 As many tourists before her, Marina also took a shoot in front of breathtaking Colosseum 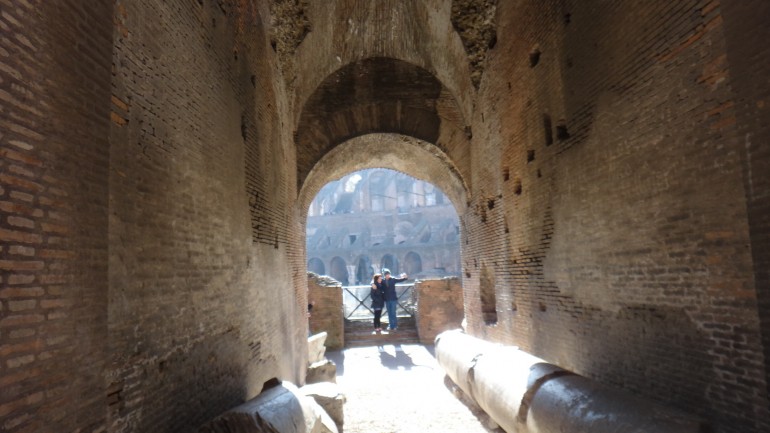 It is a well-known thing that in the Colosseum they held bitter warfare of gladiators and beasts, but also between themselves. Gladiators were usually slaves, criminals or war prisoners.

After the finished fight, the gladiator who won would turn towards the Emperor. If the ruler turned his thumb down, that would mean the death for the defeated and if his thumb went up, his life would be speared. Today’s look of Colosseum is also a result of many earthquakes and floods.

Interesting and incredible tour of Colosseum and museum gave us much energy to keep going whit Rome sightseeing.

We literally run from one destination to another and made many pictures on the go. We had a great desire to see as much as possible in short time so this time we didn’t go to restaurant. We took a slice of famous Italian pizza and move on. Our next stop was famous Roman Pantheon. 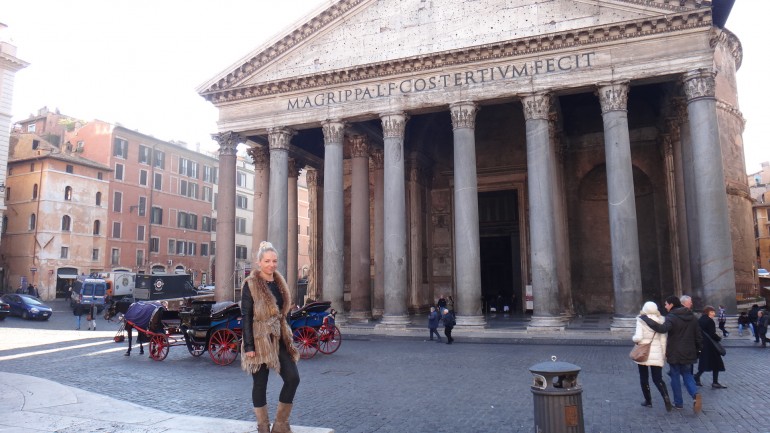 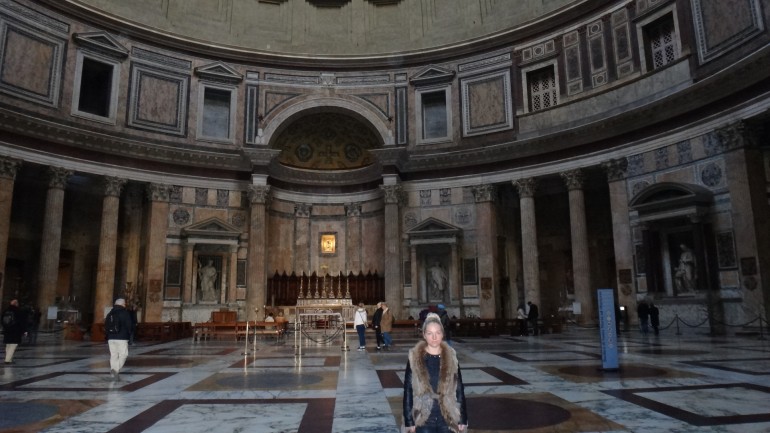 Pantheon or the Temple of all Gods is built about 126 BC during the reign of Emperor Hadrian. Graved in the temple is an inscription from the previous temple, which was built by Marcus Vipsanius Agrippa in 27.-25. BC. Another inscription on the temple, records the restoration work done on the Pantheon by order of Emperor Septimius Severus and his son Caracalla in 202. Year, the temple is very well preserved and is one of the best buildings from that age in this time. Today, temple is used as a Christian church that looks beautiful and very spacious. 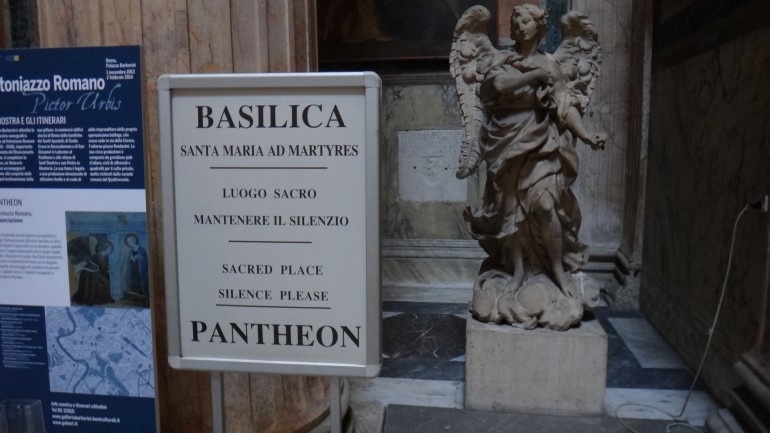 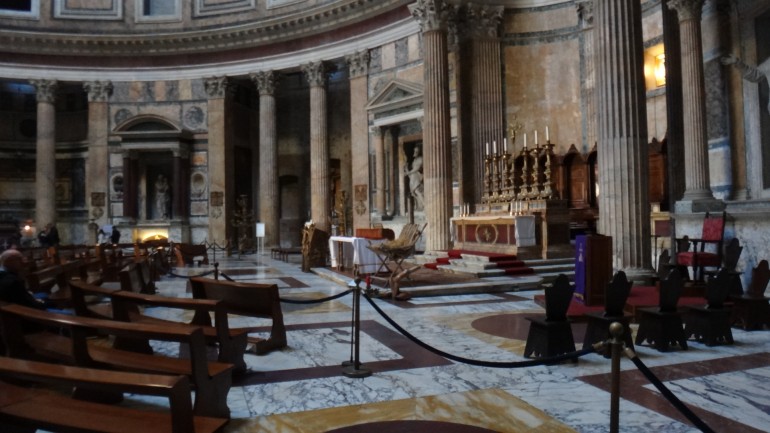 As said earlier, we made a multitude of images and using our quick feet we raced towards the Vatican.

The Vatican is the smallest independent country in the world in terms of size and population. It is located in the center of Rome and it’s total size is only 44 hectares. In the United Nations organization Vatican has the status of observer in the name of Holy See.

The Vatican is the seat of the Pope, the head of Catholic Church, the Bishop of Rome and the elected monarch of the Vatican. Pope is elected by the collegium of Cardinals on a life function. Technically, the Pope is an absolute monarch, which means it has full legislative, executive and judicial power in the Vatican. He is the only absolute monarch in Europe. 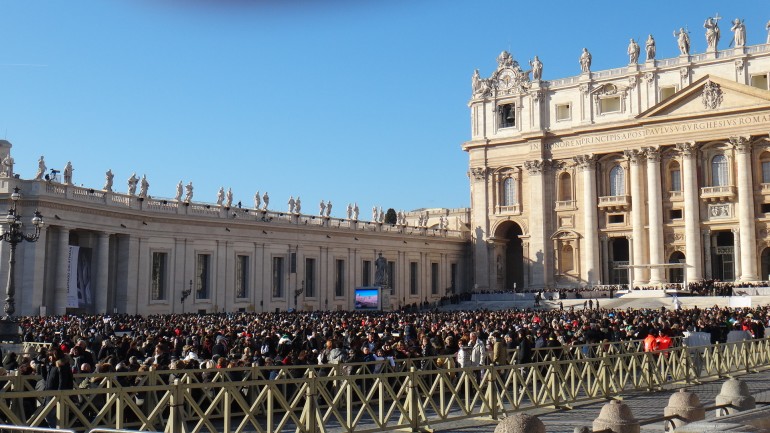 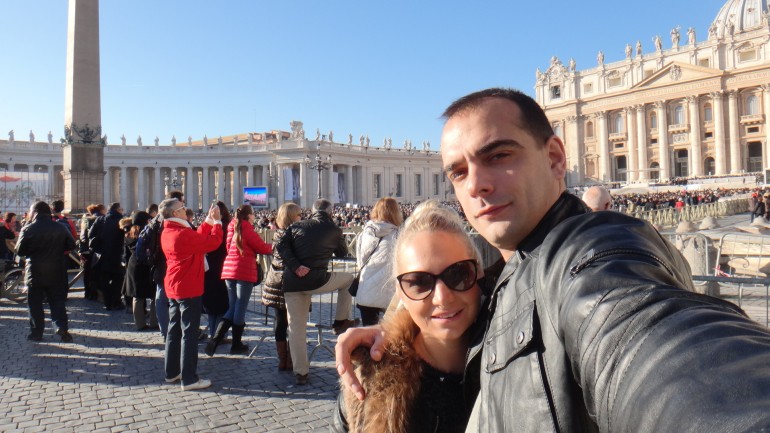 One selfie from the Saint Peter square

We strolled by St. Peter square and it’s huge, circular with big obelisk in the middle. On each side of the obelisk is fountain and there are also four taps with drinking water. In nearby of square are many sources of water so be sure that you will not be thirsty. Square is surrounded by four rows of pillars on which you can see numerous statues of saints. In obelisk is marked a point at which when you stand and look, you basically see that all pillars look as one. 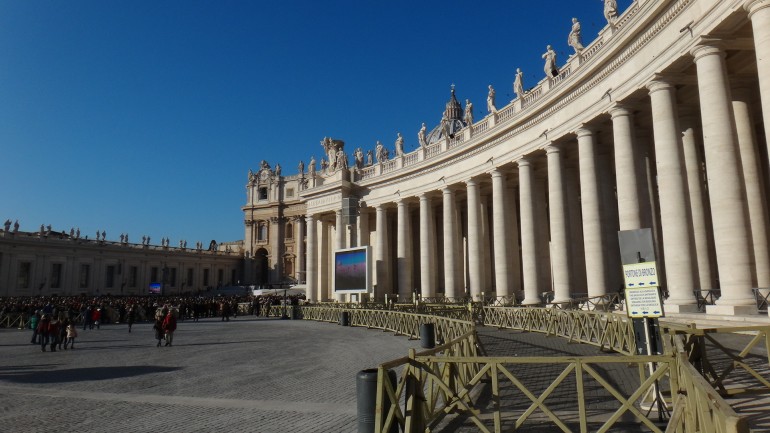 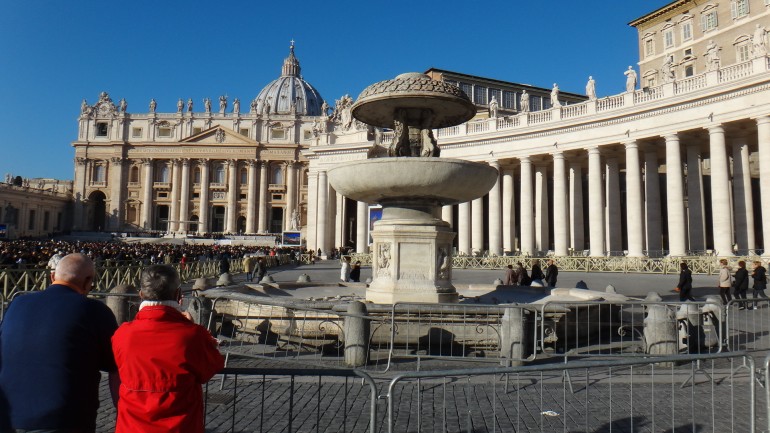 Basilica of St. Peter was unfortunately shut-off for all the visitors but on another occasion we plan to visit it. Also to separate few days and visit this amazing place inch by inch.

Night was only for us, so we went in nice restaurant and enjoyed with romantic dinner and Italian wine. Later that evening we walked to the one of the most beautiful fountains in the world. Fontana di Trevi or Trevi fountain

Rome is the city of fountains and there is over 280 and Fontana di Trevi is one of a kind. The queen of all fountains. Beautiful, graceful, attracts many tourists and all of them throw a coin into it, because the legend says that once you throw a coin, for sure you will again visit Rome. 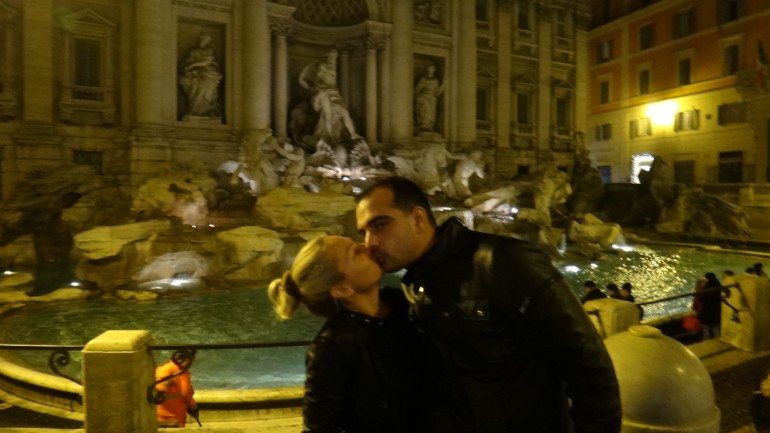 A nice kiss near the fountain :* 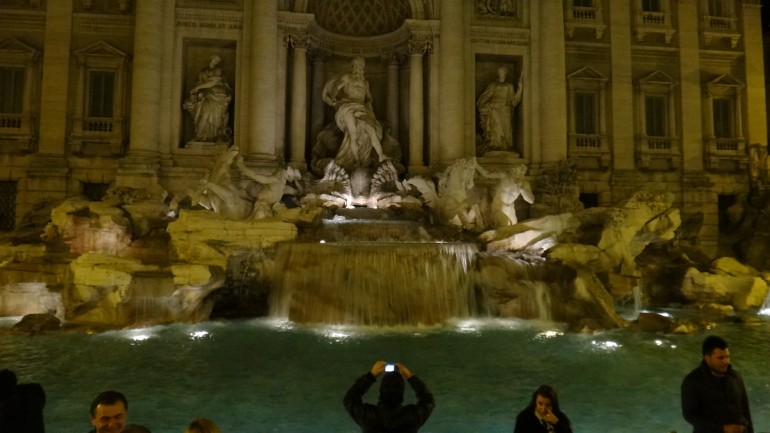 Roman fountains left the biggest impression on us 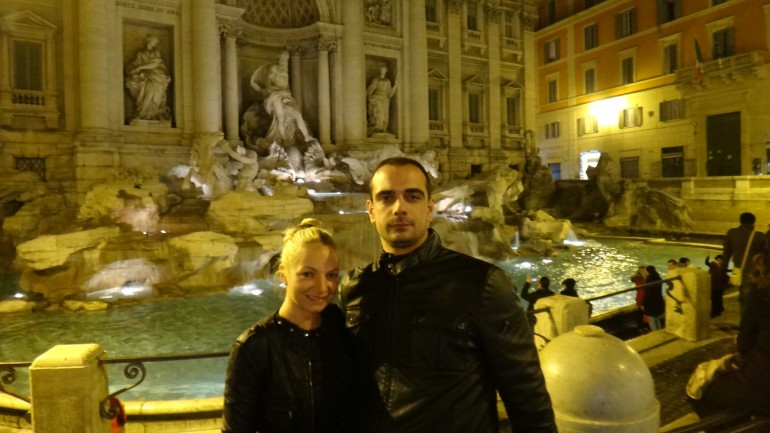 Till the next time 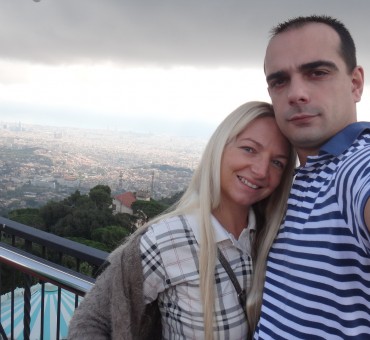 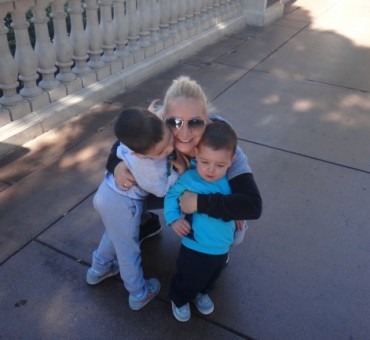